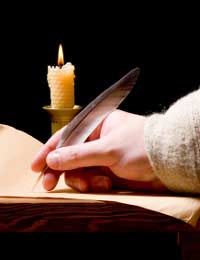 Maybe you’re a novelist and you’ve decided to set your next book in medieval Europe. Perhaps you’re an essayist and want to compose a tongue-in-cheek commentary about the way today’s political scene is reminiscent of the fall of the Roman Empire. Whatever your plans, if you’re going to write about historic periods, you’d better be prepared up front to do some research.

Before you begin to moan and groan or assert that you have a deep understanding about a particular era and therefore don't need to research it, understand that no one person can possibly know 100% about a time which has passed into the annals of history. Even those who lived during the 1950s may be surprised upon researching the decade; how many of us really have paid attention to the nuances of our culture in enough detail to write about it with complete authenticity? Thus, even if you’re a professor of Ancient Greece, you’ll need to at least refresh your memory before beginning your tome set in the Mediterranean during 750 B.C.E.

Below are some of the best places to find what you need in terms of accurate historical era information.

Chances are strong that no matter what period you’re writing about, there are existing writings that can help you find out more. For instance, if your piece is set during the American Civil War, you could begin reading famous authors’ works from the period of roughly 1861-1865 (not to mention before and after.) Poetry, plays and novels are all terrific resources and will give you insights into the verbiage used and the cultural mores.

If you’re writing a novel and will include any kind of references to food, whether eating, growing, catching or cooking edibles, you can always turn to a historic cookbook for advice. There are plenty of recipes online that have been passed down from generation to generation; for ancient fare, you can still find many translated documents in your local or university library or in cyberspace.

Should you decide to use the media (television shows, films, documentaries) as research sources, know that you’ll want to back up whatever is being shown and said. Plenty of directors, producers and writers take liberties when it comes to historical accuracy; thus, the correctness of even the most authentic-seeming drama could be seriously lacking.

Museums and historical preservation societies are fabulous resources for the writer who wants his or her characters and settings to be true to a particular period. You may even what to travel to the site of the preservation society site, if applicable (and feasible) to get a better feel for the era.

Finally, it might be wise to spend some time really putting yourself into the mindset of the period (after conducting initial research, of course.) Allow yourself to act out the parts in your head, always asking the tough questions, such as:

Remember that in the end, you’re the author. But if you want readers to be captivated by your story rather than constantly distracted by anachronisms, you’ll need to conduct research the right (perhaps the "write”?) way.

What is Flash Fiction?

Make Your Own Bookmarks